The fuel economy of three trucks with trailer, driving with identical freight weight each day on same route is measured with different engine oils. One of which a mono-grade SAE 30, a multi-grade SAE 20W40 and the same Multigrade SAE 20W40 treated with Ceramic Engine Protector.

The route each truck drove each day included many highway kilometers. Since engine friction plays a smaller role in fuel economy during highway kilometers it is expected that results under more demanding engine loads will be even better.

Before the trucks left for their daily route each day the fuel tanks were filled to the same level. Next to this, the oil level and tire pressure was measured and when needed adjusted to the right level. The amount of fuel in the tank was registered, just like the outside temperature, oil temperature, kilometers and time of departure. During the trip at stops the same measurements were made.

During 6 weeks each truck drove on the three types of oil mentioned earlier. The first 14 kilometers were considered as ‘cold’ and for this purpose an external small tank was used to get the best accuracy in combination with a flow meter. After 14 km the tank was disconnected and the main tank was activated.

The fuel usage during start was high and the trailer was loaded with over 20 metric tons. During this cold period the multi-grade 20W40 on average used 4% less fuel than the monograde oil. The multi-grade oil with Ceramic Engine Protector scored the best of the 3.4% was gained in comparison to the normal multi-grade and 7% gained compared to the mono-grade.

Since the first 14 km on our testing route was plain and simple and very little starting and stopping had to be done the influence of internal friction under our testing conditions was quite low compared to ‘normal’ conditions. 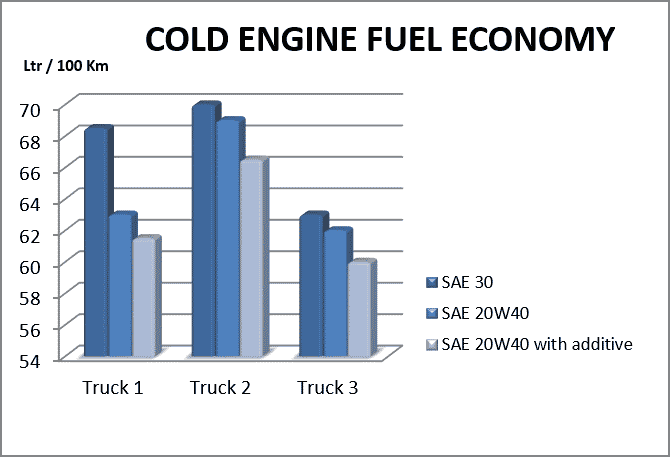 During warm conditions the oil treated with Ceramic Engine Protector on average gained 5,2% compared to the mono-grade oil and 6,4% in comparison to the multi-grade oil. Considering the fact that our testing conditions were not highly demanding of the engine (most of it highway kilometers) it is estimated that the savings which are made could be even higher.

Once a week the fuel consumption during idling was also measured. Again a flow meter was used for this purpose. Also with this test a lower usage from the treated oil was measured. Compared to the mono-grade oil 8,7% was gained and compared to the untreated multigrade 3,6% less fuel was used. 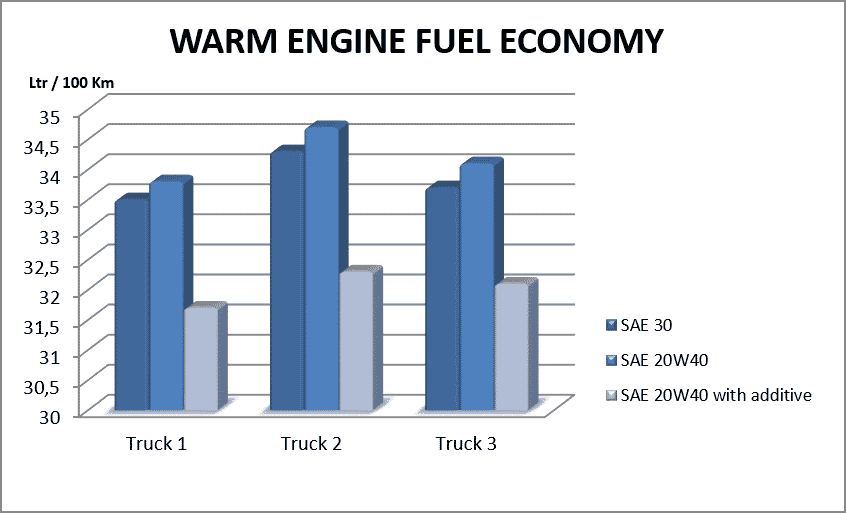 During each oil change a sample was taken by an independent laboratory which analyzed the content of various in the engine oil. Although only 9 samples were analyzed the positive effect on reduction of internal wear is already easy to see.

Especially the iron, aluminium and silicone scores are impressive.

Let’s say an average truck drives around 200.000 kilometers a year. Let’s assume on the safe side 2,5% better fuel economy could be achieved by using a treated oil. If the truck uses 1 liter per 3 kilometers. Per year this truck would need 666 liters of diesel. At a EUR 1,- per liter diesel price and a 2,5% fuel usage reduction this equals a EUR 1.666,- saving only on fuel per truck per year. Not to mention the possible savings which are made by the strong engine wear reduction and consequently it’s lower maintenance costs. 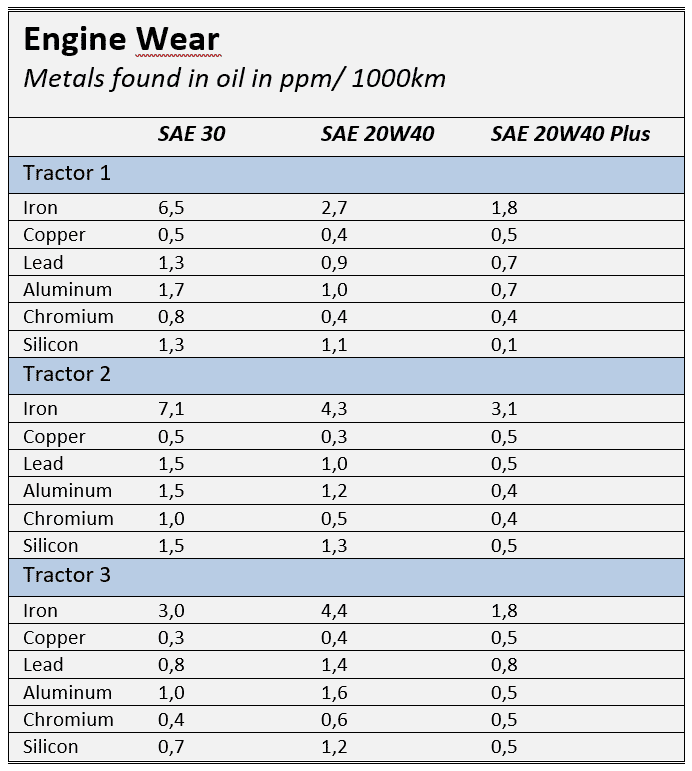 Not measured during these tests, however clearly noticable Ceramic Engine Protector makes the engine run more quiet and smooth. This cannot be expressed in figures nor savings but is very much valued among our clients.